Home News by Topic Discrimination and Xenophobia
The perpetrators involved in the attacks in Cologne, Dusseldorf and Hamburg must be brought to book, regardless of their origins. Those using the suffering of the New Year′s Eve victims to foment popular prejudice against individuals who have fled inhumane suffering, however, compromise their own humanity.

The New Year′s Eve attacks outside Cologne′s main railway station were absolutely unbearable and unacceptable. Numerous women were victims of sexualised violence perpetrated, according to witness statements, by a mob of men. Spiegel Online reported on Sunday that 516 charges have been filed with the Cologne police force – a large number of them for sex offences.

According to the police′s own statements, they were overwhelmed by the situation and unable to protect the women. The first reaction over the past week was to send Cologne′s chief of police Wolfgang Albers into retirement. All of this has been more or less unanimously reported by the media and may therefore be conditionally regarded as reliable information.

Let me underline once again in all due clarity: violence, in particular sexualised violence against individuals, is not acceptable under any circumstances – everyone who is appalled by what happened in Cologne on New Year′s Eve is rightly appalled. Those from whom this violence emanated – and these words are carefully considered – must be brought to book with the full force of the law, applying severe criminal and civil penalties.

So much as to what can be regarded as reliable consensus. From here on in begins the political mudslinging triggered by the events of New Year′s Eve. Rather than being based on firm facts, this mudslinging is occupying the realm of prejudice and political interest. The failure of a state authority – such as a police force that for some reason was incapable of protecting the people in its territory – cannot be the main focus here. Instead, we need to concentrate on the claim made by many witnesses and media outlets that the men accused of sexual harassment either came from northern Africa, from Tunisia or Morocco or Libya; or from Middle Eastern countries like Syria or Afghanistan.

The uniting factor in all the disunity consists of saying: Arabs attacked women. The suspicion that the men were refugees is one that was voiced immediately. The police and state prosecutors have not qualified this information as reliable. To date, there have apparently been arrests and interrogations of suspects from the Arab world, including asylum seekers – a handful at most.

Around the turn of the 20th century, the Arab cliche owned by many German and European minds was considered rather positive: sexual promiscuity in harems populated by belly-dancers, an impression culled from extravagant tales told by travellers to the so-called Orient. The 21st century has brought a new prejudice about the Arab world – that many women there live in submission to men who cannot control their sexual urges, sexually exploit them and use religion to perpetuate their control.

A projection of the white man′s harem fantasies: around the turn of the 20th century, the Arab cliche owned by many German and European minds was considered rather positive: sexual promiscuity in harems populated by belly-dancers, an impression culled from extravagant tales told by travellers to the so-called Orient

The debauchery of the harems is nothing but unfounded prejudice – most people now seem to have accepted that. The Arab man at the mercy of his sexual urges is, however, equally unfounded. The difference is that many people haven′t caught on to this yet. Likewise, it is not yet general knowledge that the Arab world is not a single entity, a concept that exists solely inside some people′s heads.

Populist right-wing and conservative parties and groups are attempting to capitalise on this toxic blend of apparent facts and diffuse prejudice. They are twisting the fact that refugees need protection into the diametrically opposed untruth that refugees present a danger. They are suggesting that the Cologne molesters were Arab refugees, although that has by no means been confirmed.

The AfD and CSU are trying to imply that the repulsive incidents in Cologne are not an exception but the rule. Classic racism: the Arab sex-offender. The message implicitly or explicitly being sent out by the AfD and CSU: Germany should not accept any more refugees – so as to protect women. 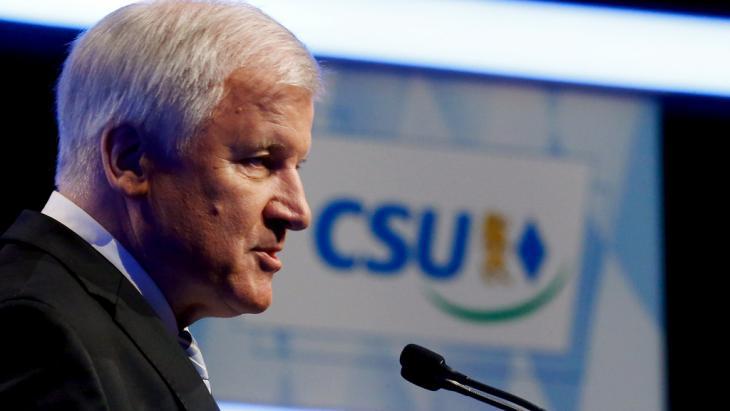 A radical about-turn regarding immigration policy: the Bavarian prime minister Horst Seehofer (CSU) was already threatening to bring a suit against the Federation in Germany′s Constitutional Court back in October, should the federal government fail to stem the flow of refugees. As a result of the Cologne attacks, the CDU and CSU are now calling for the relevant legislation to be tightened. According to the CDU leadership, refugees convicted of violent crime who are sentenced to prison without parole should lose their right to asylum. The CSU goes further: using fast-track procedures, offenders should be deported immediately

The facts: Terre des Femmes states that 13 percent of all women in Germany have ever experienced sexualised violence. Only a sad 5 percent of rape cases ever end in prosecution. Anyone looking for statements on that subject on the CSU and AfD websites will find nothing. Why aren′t they interested? Possibly because that sexualised violence is presumably perpetrated by native Germans, not by Arabs? Why is there no outcry in the AfD and CSU against the daily attacks on refugee accommodation in Germany – arson or gun violence – homes where women and children are seeking protection, having fled the sexual slavery of the so-called Islamic State?

The pro–″stay-at-home mothers″ party at the service of women?

The CSU, the party that initiated a payment for stay-at-home mothers and has the lowest proportion of women members, is only entering the battle for women′s rights because it sees it as an opportunity to agitate against refugees. Five years ago, the CSU voted for a 40 percent quota for women ministers – to this day, only 5 out of 17 cabinet members are female and these women only come to public attention when they are in difficulty.

Just a reminder: when the German parliament legislated against marital rape in 1997, not only Horst Seehofer – the current CSU chairman, 48 years old at the time and thus presumably of sound mind – but also numerous other CSU politicians voted against the law. To quote Andreas Scheuer, CSU General Secretary, on 5 January 2016: ″anyone who does not accept our rules of co-existence, including respect for women, can have no place in our society here in Germany.″ Does that apply only to foreigners or also to native-born Germans, Andreas Scheuer?

What happened to many women in Cologne on New Year′s Eve is terrible, cannot be justified or excused by any means. Yet that also means that it is not important where the men come from – they are criminals and all individuals are equal before the law. If it can ever be established without doubt who the attackers were, then will be the time to discuss further measures.

The perpetrators involved in the attacks in Cologne, Dusseldorf and Hamburg must be brought to book, no matter who they are. Yet anyone using these women′s suffering to turn public opinion against those who have fled inhumane suffering themselves compromises their own humanity.

Translated from the German by Katy Derbyshire

President of the UK’s National Union of Students pulls out of...